Objektbeschreibung des Gastgebers:
Amazing Athens Central Downtown Apartment is ideal for gays and lesbians. It is right in the heart of Athens, three metro stops away from the gay area of Athens and therefore accessible most of the hours of day and night through public transport. Alternatively it is just ten minutes away by taxi which makes it a very cheap ride especially for a group of 2 or more... More particularly, guests can catch the Metro line 1 from Agios Nikolaos station and change after two stops in Monastiraki to line 2 and get off at the next station, Kerameikos, which is where the gay area is located. The majority of gay bars clubs and restaurants is there the most popular of which being Kanella restaurant which is famous for its well cooked traditional Greek cuisine, S-cape club for youngsters and Sodade club which is has been an lgbt landmark for more than 20 years. Kolonaki and Thission, two additional gay friendly areas are also neighboring to Exarheia area. Kolonaki and Lycabettus hill attract the most elegant and Bon viveur of the tourists and Thission is preferred by more romantic ones with interest for antiquity, nice walks and exploration of ancient athens.

The Apartment is astutely designed to cater for travelers. It is fitted with a fully-equipped kitchen, a bedroom with a king size bed, a second bedroom with a double bed, and a large wardrobe. The well-partitioned living area is equipped with LCD TV, sofa bed and working space with computer. Our guests will be able to live as they would at home, with the option of cooking and preparing their own meals. The bathroom is fitted with a bathtub where our guests will get to enjoy a fresh, hot shower, after which, they are able to unwind by putting a show on the television from the variety of satellite channels or watch a movie with on-demand cable - tv services and High-speed wireless Internet service. The apartment is fully air-conditioned

House Rules:Guests can behave as they would in any block of flats, freely and leisurely up to the point that they do not disturb neighbors. 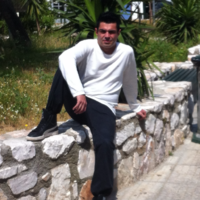 Hello everybody. My name is John and I am an English teacher and a Historian. I am interested in history, ancient to modern, and I like to travel and get to know other countries' way of life and beliefs. When I travel, I like to live as a local, discover things myself and learn things by discussing with locals. I don't like pack holidays and guided excursions unless I am the guide myself... I can do it for others but personally, i prefer finding things out myself. My hobbies are technology, movie viewing, reading and idling... My interests are ... history, international affairs, politics and many others of the kind.

One of the beds had no mattress. We informed our host immediately and he brought a mattress to days later. The appartement was nice and clean.
Elka - 26.10.2019